OCC Past News
Oilfields Curling
​Congratulations to Team Muise - 2022 Curling Alberta Mixed Champions
We enjoyed a competitive week of curling with the top 8 Mixed teams from across Alberta. Lots of excellent shots and many close games including Sunday's 9-end final between Team Muise vs. Team Powell.
Good luck in the Canadian Championship! 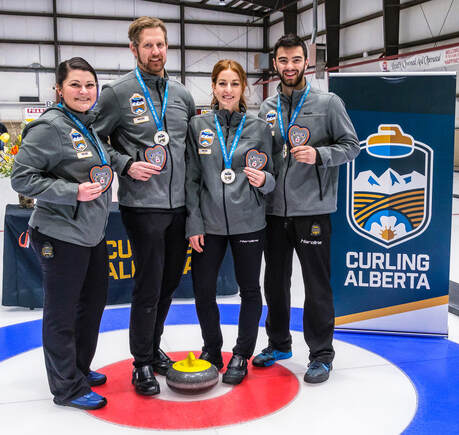 This is being done to protect our members and their families from possible exposure to the Covid-19 virus, which has progressed dramatically in just the last few days.

Of note, other jurisdictions are going to even greater lengths with several US states closing all bars and restaurants along with schools and even small gatherings. It is certain that Canada will follow suit shortly. While many may feel it is an overreaction, we cannot take the risk and must err on the side of caution.

For those people with equipment in their lockers, we will wait for this to end and then make arrangements. May 2nd is the scheduled date of the highway cleanup. Assuming it goes ahead, that might be a good day. Anyone with a need to get stuff out sooner, let me know and we'll arrange a time. There will be opportunities but the only activities at the club will be Mike and his crew removing the ice.

Tim Tomayer
President
Oilfields Curling Club
A very successful Oilfields Ladies’ Curling Bonspiel took place Jan 2 - 5, 2020.
Thank you to our sponsors for their donations. Community support enables us to host such a great event.
Check out the photos from the bonspiel here.
Okotoks U-18 Update November 15th - 17th, 2019
Team Molnar - Cheldynn Molnar (skip) led her team of Page Anweiler (3rd), Sydnie Molnar (2nd), and Black Diamond's Macey Anderson (Lead) to the girls U-18 Finals last weekend. Only to lose to the Koreans, who were awesome on Sunday, 9-2 in 5 ends.  Great weekend for Strathmores Molnar team.

Team Jacques - Team Jacques led by Edmonton's Rachel Jacques (skip), Cameron Kuzma (3rd), Black Diamond's own Sydney Libbus (2nd), and Kaitlyn Zeiler (Lead) managed to make it all the way the the semi-final of the girls U-18, but lost to the eventual champions, the Park team from Korea.

Team Kiist - Skip Ben Kiist of Okotoks led his team of Micheal Keenan (3rd) of Black Diamond, Marcus Yurko (2nd) Okotoks, and Logan Thomas (lead) also of Okotoks, to the boys U-18 finals against the Burton team from Edmonton. In a hard fought battle they came up just short.

A great weekend for our local boys!!
​October 2019 - Coming Friday to the Oilfields Curling Club in Black Diamond, AB
See photos from the Battle of the Breweries here.
Club Renovations - Summer of 2019
Check out the renovations at the rink for the start of the 2019/2020 season.  New carpets have been installed on the lower clubroom floor, including the locker rooms and around the ice.  The "dropped" floor in front of the viewing windows has been removed, which will provide a safer and more useable space.  The change from the old tile flooring is remarkable.  Painting was also part of the project.  Thank you to all the volunteers who worked, planned and managed the project.
2019 - Team Molberg Wins Provincial Championships
Meanwhile at the U18 Boys Championships, Team Molberg (Skip Nathan Molberg, Third Benjamin Helston, Second Oilfields product Nicholas Warkman, and Lead Morgan Bilassy), Won the provincial championships and will be heading to the 2019 Canadian National Championship.  Awesome work boys, and good luck.
2019 Team Jacques - U18 Womens Provincial Playdowns
Congratulations to another local curler, Second Sydney Libbus of the Oilfields Curling Club, for qualifying with her team of, Lead Gabby Wood, Third Cameron Kuzma, and Skip Rachel Jacques, for the U18 Provincial Playdowns. Where they had an outstanding first attempt at provincials, with a 4-3 record, Losing the 3 vs 4 playoff game.  The next few years look very promising for young Oilfields Curlers.
2019 - Team Keenan in Alberta Bantam Championships
Congratulations to the Oilfields Curling Clubs' Bantam team of  Lead Jaedon Bretzlaff, Second Marcus Yurko, Third Ben Kelba, and Skip Micheal Keenan, For Qualifying for the Alberta Bantam Championships.   Where they played very well with a 2-1 record, finishing second in their pool, and falling just short of making the playoff round.  GREAT JOB GUYS, already looking forward to next year!!!! 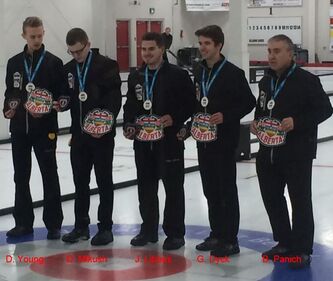 Local Curler Makes Good.....Again!!
The Alberta Junior Provincials were held in Okotoks this past week, and after going 6-1 in the round robin, the Desmond Young team received the bye into the provincial finals.  The team of Desmond Young (Skip) of Banff, AB., Dustin Mikush (Vice) of Wadena, Sask., Jacob Libbus (2nd) of Black Diamond, AB., and Gabe Dyck of Edmonton, AB., battled through 11 ends of intense curling, to come away with an 8-7 win, and the U-21 Provincial Championship.
They will now be heading to the Canadian Championships in Prince Albert Saskachewan on January 19th - 27th, 2019. Wish them all good curling and good luck. 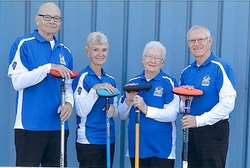 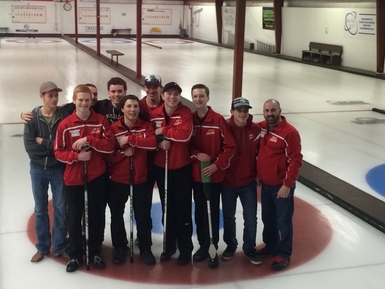 They will represent Southern Alberta and OCC in Lacombe March 4th - 6th, 2016.

Congratulations! and good luck to both teams and coaches in Lacombe.