Oilfields Curling Club History
Pre 1927 - Curling was being played on the Sheep River.  We're not sure when the first game was played but it must have been interesting.

1927 - The first curling rink in the oilfields area was built by Mr. Sam Coutis and the Royalite Oil Company.  Built S.E. of the legion hall, it had 3 sheets of natural ice.

1959 - The T.V.O.C.A. had moved into their second faciltiy, an old warehouse owned by Home Oil, in Black Diamond.

1996 - The T.V.O.C.A. moved into their current facility, after 4 yrs of volunteer work, fundraising, and construction.

2006 - Two members of the O.C.C., formed the idea of what is now known as the Foothills Triple Crown of Curling.  forming the first alliance with the Highwood, and Okotoks Curling Clubs.

2007 - Volunteers spent the summer re-designing and renovating the downstairs viewing area and the curling arena.

2009 - The Oilfields Curling Club celebrated their 50th anniversary of their incorperation, by holding the Frosty Rocks outdoor Bonspiel.  The first time in 82 years, the members had to curl outside!!

2012 - For the first time ever a team from the O.C.C. qualified for provincials.  The mens team, Skip Matt Blandford, Third Mike Libbus, Second Brad MacInnis, and Lead Peter Keenan, qualified for the 2012 mens provincials with a 7-2 record in the districts and southerns.  They played valiantly but went 0-3 at provincials.  Maybe next year?

2016 - The OCC sends two under 18 teams to represent southern Alberta at the provincial championships.  They finish 2nd and 3rd at provincials. 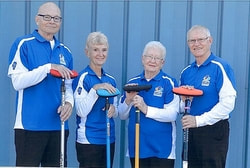 2018 - Skip Lloyd Nelson, lead his team of Rose Dayment, Jim Nicolson, Barb Larson to the 55+ NATIONAL TITLE.  Being the first team from the O.C.C. to rise to such an esteemed position. 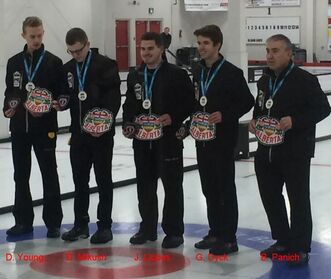 At nearly the same time, Sydney Libbus of the Oilfields C.C. has qualified for the U18 Provincials for the first time. She is playing second with lead Gabby Wood, Third Cameron Kuzma, and Skip Rachel Jacques.  Their record at provincials was 4-3, Losing the 3 vs 4 playoff game.  O.C.C. young guns keeping it exciting.