This is being done to protect our members and their families from possible exposure to the Covid-19 virus, which has progressed dramatically in just the last few days.

Of note, other jurisdictions are going to even greater lengths with several US states closing all bars and restaurants along with schools and even small gatherings. It is certain that Canada will follow suit shortly. While many may feel it is an overreaction, we cannot take the risk and must err on the side of caution.

For those people with equipment in their lockers, we will wait for this to end and then make arrangements. May 2nd is the scheduled date of the highway cleanup. Assuming it goes ahead, that might be a good day. Anyone with a need to get stuff out sooner, let me know and we'll arrange a time. There will be opportunities but the only activities at the club will be Mike and his crew removing the ice.

Tim Tomayer
President
Oilfields Curling Club
2020 Curling Alberta Mixed Provincial Championship is Postponed
March 13, 2020  -  The Bring a Friend to Curling event has been canceled and will be re-scheduled in the fall once curling resumes.
2020 OCC Mixed Bonspiel Results and Photos 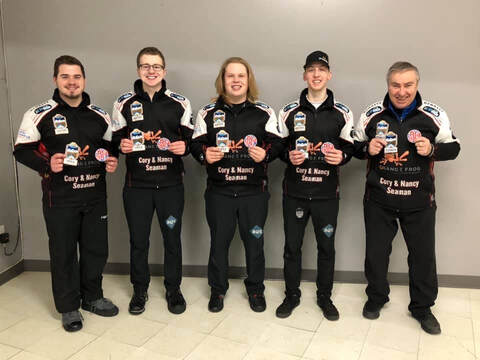 This past weekend Jacob Libbus and his teammates won the B Event in Edmonton to qualify for the Men's Provincial Playdowns in Westlock  February 5-9.  Winner there goes to the Brier.

This is a darn good achievement and, on behalf of the club, I congratulate Jacob and his team and wish them well in the next round. We'll use the facebook page to post results on that weekend.